I care for Landcare

Finally, on Tuesday 27 th April, after a few hiccups due to COVID, 45 students from Bullarto and
Yandoit Primary schools plus the Dharma schools attended “I care for Landcare” event on the Hill.
The Friends were delighted to welcome the students back to the Hill and had worked diligently to
provide a workshop which would not only be engaging but would provide real educational
opportunities for all who attended.

John Caldow from Bug Blitz provided a wonderful hands-on session for the students where they
were able to learn more about some fascinating spiders and ‘bugs’. John shared his love of these
creatures by first introducing Teddy, the Mountain Huntsman, followed by other spiders, a scorpion
and leaf insects. Students had an opportunity to hold many of the bugs and observe them closely.
Louis Caldow also from Bugblitz had brought a selection of animal skulls, pointing out the individual
characteristics. Students had to decide on whether they were marsupial, feral or domesticated,
predator or prey, carnivore, herbivore or omnivore, common, stable, threatened or extinct. Louis
was such an enthusiastic source of information and the children were all engrossed with the subject
also having an opportunity to share some of their own animal encounters. Louis’ has inherited his
father’s flare for working and engaging with kids in biodiversity education.

A fun hands-on and informative learning session about Fungi was led by Ema Coro of Fungi map and
well supported by Gayle Osborne from Wombat Forest care. Each session was spent examining a
variety of wild fungi, slime mould and lichen through digital microscopes provided by Fungi map with
Ema and Gayle explaining the different parts of the fungus (mycelium, fruiting body, spores, etc) and
the role these play in the environment.

Ceramic Art has been a feature of these workshops with noted ceramicist Ann Ferguson and Kaori
Fujimoto leading the way. Using coloured photographs to demonstrate the parts, shapes and
construction of a variety of fungi, the students then spent some time examining real specimens
brought for the event, after which they then constructed their own model to be fired and exhibited
in the local Bendigo Community Bank before being returned to each school.

Using the CSIRO produced book “The Forest in The Tree – How Fungi Shape the Earth”, Nicole
Howie led the students on a journey of discovery with stops along the way to dramatise, illustrate,
classify, experiment and reflect. Students took the roles of the various microbes and learned how
they symbiotically cooperated with the trees. This proved to be a fascinating session for the students
linking in very well and balancing well with the Fungi rotation.

Landcare Victoria has been a loyal supporter of the Friends over the past 5 years and the Friends are
grateful for their belief in the work they do with local schools.

To quote from John Caldow: “From my way of thinking – our society should consider providing
environmental education events as a form of ‘direct’ action for our environment’s future
sustainability. We are helping to collectively build our students and teachers ecological literacy.
Those kids received a fantastic, engaging and memorable range of learning experiences.”

Friends can proudly announce another grant, this time from Landcare Victoria totalling $14,175.  This will ensure that our weed eradication and replanting program will continue as well as our educational workshops.

We are also thrilled to be partnering with Birdlife Australia for a bird walk on the Reserve on Saturday 12th October. Download flyer here.

And don’t forget the Aussie Backyard bird count from 19th to the 25th October 2020. For more information, watch this space for information about a Bird walk hosted on our behalf by Tanya Loos and Jane Rusden both members of Bird Life Australia. 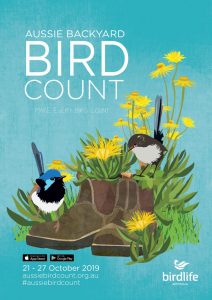 Welcome to the July 2020 edition of the Friends of Cornish Hill newsletter. Please download the newsletter here. 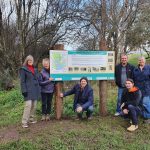 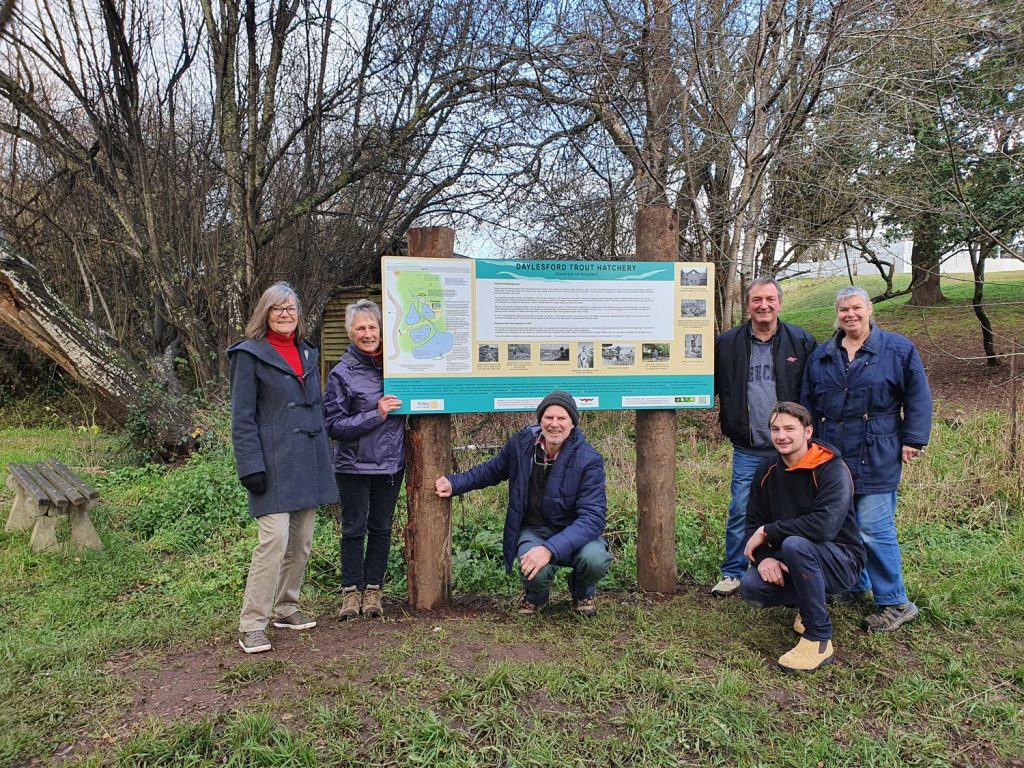 A comprehensive Interpretive Sign has been installed at the old Daylesford Trout Hatchery, reflecting its importance as a local enterprise that contributed significantly to the region’s well-being from the early 1950’s through to the mid 1970’s.

Many people still visit the site to collect mineral water from the nearby natural spring, without having any idea of the Hatchery’s prior importance.

This sign addresses that gap in visitors’ knowledge and provides detailed information on the development and operation of the Hatchery, as well as illustrating day-to-day activities undertaken, using archival photos and other historical information.

Many people from Daylesford and surrounds contributed to the project, which was initiated by Friends of Cornish Hill members, either by meeting on-site and/or sharing photos and stories as well as memories of when this Trout Hatchery was recognised as “an illuminating example of profitable fish raising”.

Thanks to Mark Paganni from Conservation Volunteers Australia, we were invited to host a team of 9 volunteers plus a California Conservation Corps team plus one team leader to assist with clearing and brush cutting the walking tracks.  The timing was perfect.  Recent rain and warmer temperatures had seen a massive growth of grasses and fire risk had been a worry for the Friends.  Within minutes of arriving the air was filled with the sound of 6 brush cutters, with other members raking away the cut grass. With the main tracks clear of high grass, those enjoying a walk on the Reserve were reassured that the way is clear again for them to enjoy the ambience of this wonderful reserve in the heart of Daylesford.  And all of this happened on Wednesday December 11th, just in time for the serious fire season.

The following promotional video was produced by the bank and contains individual videos from various community organisations who were invited to take part.  We are sure that you will find all the videos interesting viewing and in particular, draw your attention to the section featuring Cornish Hill and Margie Thomas, immediate past Chairperson.

Getting rid of the weeds

Interesting things have been happening on Cornish Hill as the Friends as we explore different ways of eradicating weeds and reducing our use of herbicides. Thanks to our neighbour Vasko, 8 gorgeous goats have been devouring their way through broom, blackberry, willow and other woody weeds. And just around the corner, mighty Ivon the not so terrible has been wielding the brush cutter to remove the infestations of blackberries along the creek.

At the other end of the Reserve, at the picnic area, Kieran Foley of Steam Weeds Eco Weed Management has been using high pressure steam on the weeds growing through the gravel near the Interpretation sign. 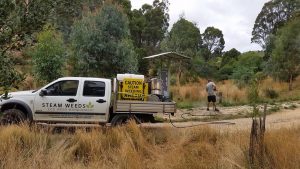 Removal of flowering gorse heads and cutting and painting willow suckers have taken place in the past. Big thanks to everyone who has taken part in this exercise. We can’t do this sort of thing without the help of our volunteers, We are looking forward to hosting a Conservation Volunteers team later in April and you might have guessed!  Weed eradication will be the name of the game then as well.

Late last year we engaged a team from Aus Eco Solutions to complete a lot of weed removal above the picnic table.  The initial brush cutting took place in November and significant rainfalls in December encouraged regrowth of the gorse.   A return trip from Aus Eco in late January gave us a great opportunity to spray the regrowth.

Success with a Hepburn Shire Small Equipment grant meant that we were able to update the storage container we share with the Cornish Hill committee of Management. The installation of a whirly bird roof vent improved ventilation and airflow, shelves and hooks for our brush cutters and small tools meant that everything was held off the floor and a special; cradle was made to support our big augur.  The work was completed by Daylesford Engineering.