The Green Army, an initiative of the Abbott Federal Government, is a hands-on, practical environmental action program that supports local environment and heritage conservation projects across Australia. Having hosted 4 visits from the Green Army over the past 3 years, the Friends consider themselves to be very lucky as the program is to be phased out by June 2018. For one week beginning on Monday February 12th, a team of 8 plus team leader helped the Friends slash down large infestations of broom, gorse and blackberries as well as cutting and painting out re-emerged seedling woody weeds. Fortunately, we enjoyed cooler weather which made for a better working environment for the team and the real bonus is that Jesse and Freja have decided to sign up as members of our group. 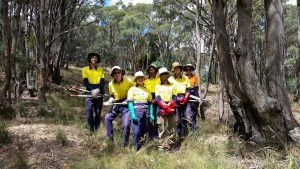 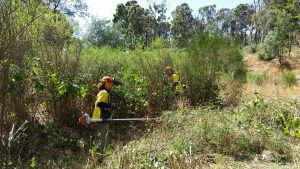 Flora and fauna walk during ChillOut 2018

Friends of Cornish Hill are proud to be able to host a flora and fauna walk on the Reserve on Saturday 10th March. The walk commences at the Lookout which is situated above the Community Park and can be accessed by walking or driving up Argus street which runs off Stanbridge street opposite the Daylesford Primary school. For more information, click on the following link: http://www.chilloutfestival.com.au/upcoming-events/2018/3/10/cornish-hill-florafauna-walk 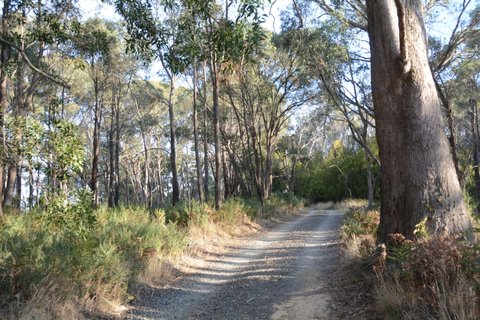 Welcome to the November 2017 edition of the Friends of Cornish Hill newsletter. Please download the full newsletter by clicking on the PDF icon below.

The second one day workshop was held on Cornish Hill on Tuesday 17th October, this time involving a total of 69 students from Yandoit, Bullarto, Drummond and Daylesford Primary schools as well as students from the Daylesford Dharma school.  This workshop focused on the precious natural habitat of the Reserve.  Students were mixed into 5 groups, with each group experiencing 5 different rotations, the aim being to understand that even the smallest creature plays an important role in maintaining a healthy environment.

John Caldow from Bugblitz presented a ‘hands-on’ session where children were introduced to a variety of spiders including the Mountain Huntsmen spiders named “Precious”. Spider evolution, morphology, behaviours and the roles spiders play in the balance of nature were discussed.  The students also explored the local habitat and the creatures they found were identified and photographed.

Erin, also from Bugblitz, introduced the students to the joys of bird watching.  A field guide and binoculars were used to find life-sized bird models of water birds which had been placed on a trail, in a local habitat. Bird sounds were played and threats to them were discussed.

Guided by Castlemaine Ceramicist Ann Ferguson, students used natural materials such as sticks and seeds to interpret body parts of insects. Paper clay to connect the parts together to make each student’s unique insect. The finished products will be displayed as an exhibition in the local community bank as part of Daylesford Rotary’s October Art celebration.

Under the guidance of Nicole Howie, students explored the magical world of bird nests, marvelling at the skill of our beautiful native birds.  Using a variety of different materials and studying different techniques, individual nests were made and installed in the local habitat. 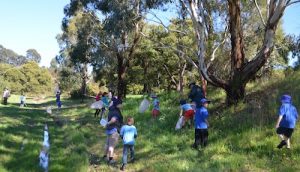 The final rotation featured frogs and the session began with Christina Renowden from Leap into Nature discussing frogs with the students, their physical features, and what they require in their habitat – both aquatic for breeding and terrestrial habitat for shelter, over-wintering, refuge and finding food. Students learned that frogs are such an important component of many ecosystems, why many are threatened with extinction and what we can do to help protect frogs and their habitat. 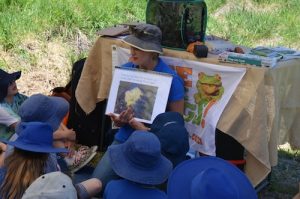 What a fabulous morning we had on Sunday 23rd July with Sean Dooley, Editor of Bird Life Magazine. Sean shared with us his childhood memories about growing up near the Seaford swamp where he discovered many water birds. He took us on his journey around Australia as he followed and recorded as many birds as he could in one year and in order to hold the record. Whilst poignant at times, he was entertaining and spoke freely about his care for and love of birds and why protecting their habitat is so important. We partnered with Plastic Bag Free Daylesford for this event, morning tea was provided by Friends members, and sandwiches made by favourite local café Muffy’s. All went down a treat afterwards and we thank them for not using any plastic wrap. On behalf of the 65 people who attended, thank you to Landcare Australia for funding this event. 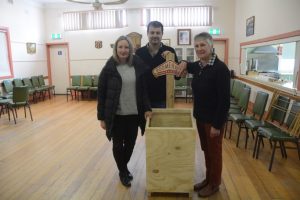 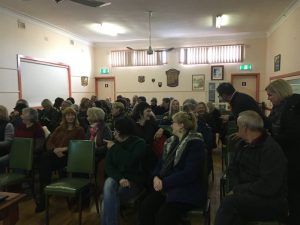 Meet the BIRDMAN Sean Dooley – editor of Birdlife Australia magazine, conservationist, author and birdwatcher – on Sunday 23rd July at 10am in the Senior Citizens Room at the rear of the Daylesford Town Hall.

Welcome to the July 2017 edition of the Friends of Cornish Hill newsletter. Please download the full newsletter by clicking on the PDF icon below.

Click on the PDF icon below to view the details about the upcoming Koala Workshop on 4 June 2017 with Janine Duffy of the Koala Clancy Foundation.

On 2 May 2017, a fantastic educational event was held with local Primary Schools. The 1-day workshop was a great success, despite the inclement weather.

Click on the PDF below to view an article from The Local describing the day in further detail:

Welcome to the October 2016 edition of the Friends of Cornish Hill newsletter. Please download the full newsletter by clicking on the PDF icon below.